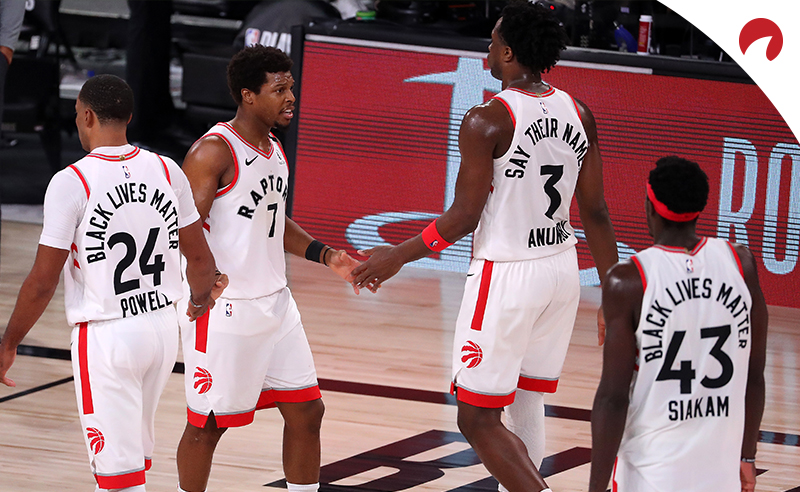 Amid the COVID-19 pandemic, the NBA was forced to enter a bubble to finish the 2019-20 regular season and playoffs. However, with the NBA and NBPA agreeing to terms to begin next season on December 22, it begs the question of where the lone Canadian team will play.

We saw in baseball how difficult it was to find a home for the Toronto Blue Jays amid concerns over cross-border travel between Canada and the U.S. It became such a problem that the club started the season on the road before shifting to the city of its Triple-A affiliate, Buffalo, partway through the season.

BetOnline has listed seven possible locations as a home for the Toronto Raptors next season, with Tampa Bay the +125 favorite, followed by Buffalo at +300, Nashville at +300, Las Vegas at +500 and New Jersey at +500 to round out the top five cities on the board.

Where will the Raptors Play Next Season?

Check out the odds for where the Toronto Raptors will begin their next campaign, one season removed from winning the franchise’s first NBA title:

Odds as of November 13 at BetOnline

Where Should The Raptors Play?

The 71 days between the end of last season and the start of the upcoming one is the shortest break in history among the four North American major professional sports leagues. In a year that has turned the world upside down, sports have managed to continue with fans slowly returning to NFL and NCAAF games.

The new NBA season will be shortened to 72 games, instead of the usual 82, in order to finish around the start of the Summer Olympics in Tokyo, scheduled to begin on July 23.

The two cities that stand out to me as potential locations for the Raptors are Tampa Bay (+125) and Nashville (+300). Tampa Bay is now the favorite after it was announced that city was the emerging choice. According to NBA insiders, it is believed that if the Raptors can’t get a deal done to remain in Toronto, then Tampa Bay would be the ideal destination.

“Ideally, the Raptors are able to play their upcoming season in Toronto. But should that not be possible, we would have a strong interest in working to successfully meet and exceed their expectations as an alternative host. We’ve enjoyed our preliminary conversations with their organization and stand ready to assist if needed.”

Expect the Raptors to use Amalie Arena, home of the NHL’s Tampa Bay Lightning, as their new home if they head to Florida.

The other option is in Nashville where the state’s only basketball team resides in Memphis. Bridgestone Arena, home to the Nashville Predators, regularly hosts the SEC men’s basketball tournament and would be the likely destination.

The one thing to consider is how far Nashville is from other Atlantic Division NBA teams. While it probably makes most sense proximity-wise to play in New Jersey, Nashville does have a reputation for being a great sports city, and the move could help attract a lot of new basketball fans (and Raptor fans).

It should be interesting to see what commissioner Adam Silver decides as the home site for the Raptors, but it will ultimately be decided by the Canadian government and the NBA.

The Toronto Raptors’ odds of playing at home in Canada are starting to become improbable. They currently have no odds on the board, and the big problem becomes traveling back and forth across the border. Ontario granted the Blue Jays permission to play in Toronto, but ultimately the federal government vetoed it.

With COVID-19 cases on the rise in the United States, the Canadian government didn’t want to risk the further spread of the virus within Canada. That was back in July, but just a few months later the likelihood of them playing at home remains bleak as cases of coronavirus continue to rise in both Canada and the United States.

If the NBA is not planning to utilize another bubble format, which seems to be the case, then I can’t see Toronto as a realistic destination for the Raptors next season.