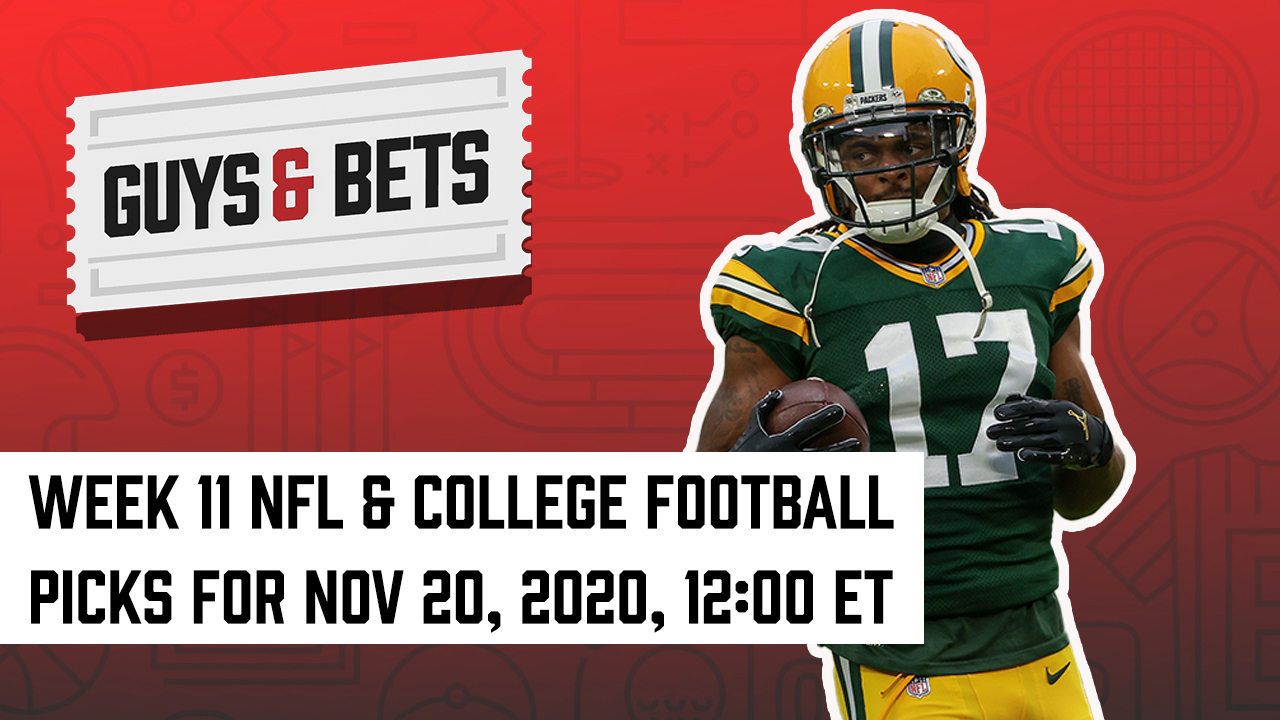 Joe Osborne, Andrew Avery and Iain MacMillan have their best bets lined up for the weekend in the NFL and college football on the Football Friday episode of Guys & Bets.

Joe has been on fire this season with his 6-point teasers and that’s where we start. For his weekly 6-point teaser, Joe is looking at the Kansas City Chiefs for one of his teams. They are on the road in Las Vegas to take on the Raiders, who are the only team to beat the Chiefs this season. Getting a Patrick Mahomes-led offense at -2 is almost too good to be true. Kansas City leads the NFL in point differential at +103 while the other team Joe is looking at is a road underdog.

After a big win last week, Joe is looking at the New England Patriots game. Cam Newton and company travel to Texas to face the Houston Texans. While these aren’t the same Patriots we’ve seen for years under Bill Belichick, they showed last week that they have some fight in them by beating the Ravens 23-17. Houston has been a disaster this season, sitting at 2-7 with both wins coming against Jacksonville. The Patriots are 2-point favorites and Joe is looking at the spread for his bet.

The Cincinnati Bengals face Washington in DC, and Washington is a small favorite for this one. Even though the team sits at 2-7, they are still in the hunt for the NFC East title as the Eagles are 3-5-1. Alex Smith is coming off a career-high 390 yards passing last week against the Lions, though they inevitably fell short in their comeback attempt. The Bengals are coming into this having lost four of their last five and sit in the basement of the AFC North. Joe is looking at the spread here.

Time for a couple of college football picks as Ninja heads to the Big Ten. Indiana visits Ohio State on Saturday afternoon as a sizable underdog. Indiana is one of the surprise teams in college football this season and is led by sophomore quarterback Michael Penix Jr., who has this Hoosiers team at a 4-0 record and ranked No. 9 this season. Ohio State is the massive favorite here, but there are more betting options than just spread or game total.

Next bet for Ninja is a side as the Hawkeyes are at Penn State to play the Nittany Lions. Penn State is 0-4 this season and has struggled to stop teams. They’ve given up 30 or more points in each game thus far. Iowa is coming off consecutive dominant performances with a 35-7 win over Minnesota and a 49-7 win over Michigan State. As we’ve come to expect over the years, that Iowa offensive line has been stellar, allowing only three sacks on the season, while Penn State gives up a ton of sacks on the other side of the ball. So the trench warfare will be telling here, but who does it favor?

Iain has two NFL bets for the show, and he’s looking at the Tennessee Titans-Baltimore Ravens game to start. Lamar Jackson and the Ravens certainly don’t look like the explosive offense they were last season and last Sunday’s game against the Patriots really showed how badly they could use a true No. 1 wide receiver. Each team is 6-3 and as far as scoring goes, Tennessee averages 27.7 points per game while Baltimore averages 27.1 On paper, it seems like an even matchup, so Iain is looking at the 6-point spread.

For Iain’s other bet, he’s looking at the NFC South matchup with the Atlanta Falcons on the road to face the New Orleans Saints. Of course the big news here is that Drew Brees is out for a few weeks with injuries to his ribs and lung. But how much of a drop-off will it be with Taysom Hill calling the shots? The Saints have won six in a row and are 4-1 at home this season.