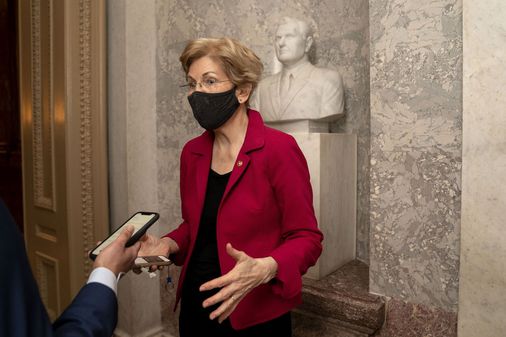 Senator Elizabeth Warren is continuing to voice concern over the GameStop stock saga, but she said she thinks the root of the issue is broader than a handful of manipulated stock prices.

She’s taking aim at the Securities and Exchange Commission, the federal agency that oversees the markets, telling CNBC Thursday afternoon that “we need an SEC that has clear rules about market manipulation and then has the backbone to go in an enforce those rules.”

“The whole point of having a stock market is so that people across this country, around the world, can invest…so businesses have the money they need to grow and to prosper,” she said. “Instead, what has happened is it has turned into a casino.”

In the case of GameStop trading, Warren said “it appears” there are people trying to manipulate the stock market, but she said it is not clear whom.

Video game retailer GameStop’s stock is surging because a group of investors — some inspired by a Reddit forum — are trying to squeeze the hedge funds and other professional investment firms that have large short positions in the stock; that is, bets on the company’s downfall. The campaign, which is largely taking place through stock trading apps like Robinhood, has worked, so far. At least one hedge fund has closed out its short position to minimize further losses, and GameStop’s stock has gone ballistic, closing Thursday near $200, up from less than $10 earlier this year.

Warren pointed out the irony of professional investment firms and hedge funds speaking out against the investors who have hurt the positions.

“All of a sudden the billionaires and some hedge funds are yelling because they are not the only ones who make money when the manipulation works,” she said.

But she’s not a fan of the Robinhood platform either, which has made it easy for first-time investors to invest, but also restricted trading in several companies today citing “market volatility.” Warren told CNBC such platforms need to be subject to more regulation to make them fair to users.

However, Warren said she does want people to be able to invest in the market.

The SEC declined to comment for this story, but in a statement Jan. 27 it said the agency is “actively monitoring the on-going market volatility.”