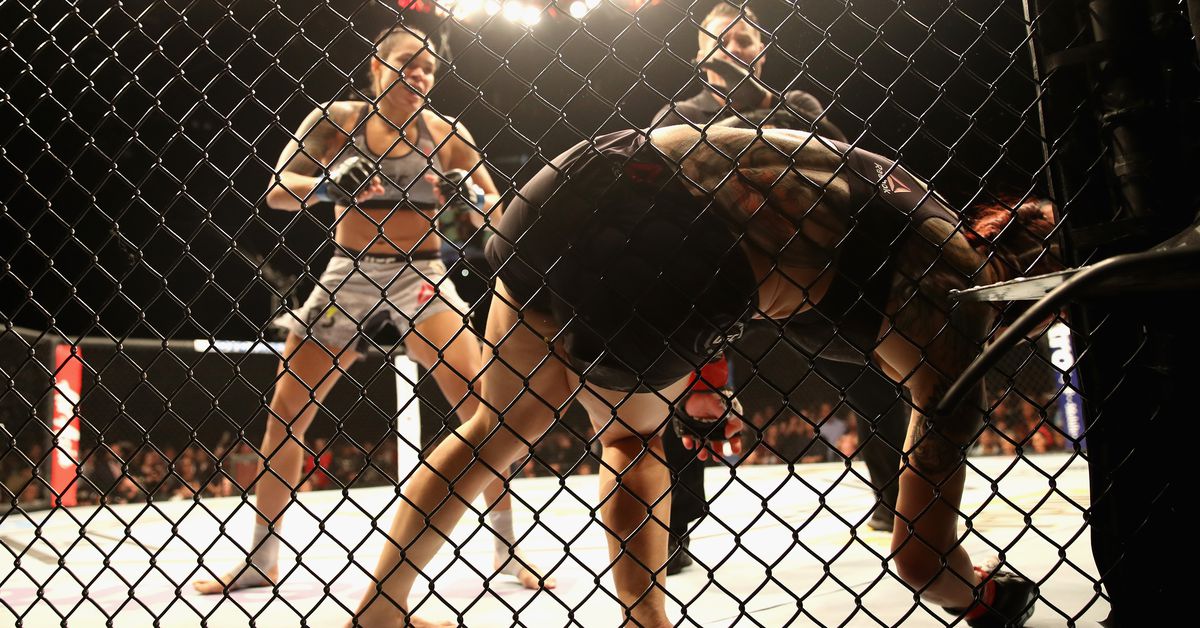 On Saturday night at UFC 259, an incredible three title fights are taking place, which makes UFC 259 one of the most stacked cards in recent UFC history. It’s rare that we see more than one title fight on a UFC card, let alone three of them.

The main event is a champion vs. champion fight for the light heavyweight title, as middleweight champion Israel Adesanya is moving up a weight class to fight light heavyweight champion Jan Blachowicz. Adesanya is attempting to become only the fifth fighter in UFC history to hold a belt in two different weight classes at the same time. In addition, Amanda Nunes defends the women’s featherweight title against Megan Anderson and Petr Yan defends the bantamweight title against Aljamain Sterling.

Below, we preview the three title fights and examine some of the UFC betting offerings for the event by DraftKings Sportsbook. The main card gets underway at 10:00 p.m. ET on Saturday.

Yan is a pressure fighter who racks up a lot of striking volume, landing over six significant strikes per minute, the most on the main card. Yan is excellent at combining pressure with angles to cut off the cage and constrict the ability of his opponent to manage distance. Once Yan has his opponent trapped inside his striking range, he is able to box them up with striking combinations to fuel the significant strike volume and do serious damage.

That said, Sterling facing a fighter who comes forward with pressure may be helpful in aiding takedowns, because he will have less distance to close to get underneath the hips and could catch Yan flat-footed during a striking exchange with a level change and shot.

However, the more Sterling attempts to take Yan down, the more he exposes himself to getting hit on the way in. Sterling got brutally starched by Marlon Moraes after getting caught off a level change, which is the biggest way Sterling’s game plan could backfire. This could be the way Yan scores the most damage in this fight—catching Sterling coming in for takedowns.

If Sterling insists on constantly attempting to take Yan down, he risks exposing his head again, and betting Yan by KO, TKO or DQ at +275 carries appeal. Yan ranks second in the history of the division in knockdowns per 15 minutes and has the power to finish this fight with his striking. Yan has finished four of his seven UFC fights by KO/TKO, including each of his last two fights. Betting the Yan moneyline at -110 casts a wider net in the event Yan outpoints Sterling to a decision victory.

This fight is one of the most lopsided title fights in UFC history, but it was booked because the women’s featherweight division is still relatively new and has not had the same opportunity as other divisions to build up depth and quality contenders. The division was mostly created out of necessity to promote Cris Cyborg, as Cyborg was unable or unwilling to cut weight beyond 140 pounds. At the time, Cyborg was the most dominant force in women’s MMA and was routinely steamrolling most of the opponents she faced with unprecedented and ferocious power striking.

Nunes ended Cyborg’s run at the top after she amazingly scored a knockout win over Cyborg at UFC 232 in December 2018, which was even more impressive given Cyborg’s aura of invincibility. The win over Cyborg made Nunes a champion in two different weight classes at the same time, which is what Israel Adesanya is attempting to do in the main event.

Nunes is one of the hardest punchers in the history of women’s MMA and has won half of her title fights by KO/TKO. If she is capable of knocking Cyborg out, she is capable of knocking out anyone, and Anderson’s striking metrics present a hole. Nunes’ fight with Anderson is extremely lopsided on paper, and betting Nunes to win by KO, TKO or DQ at +100 is an appealing way to get Nunes’ moneyline down from a massive -1000.

Adesanya is tall and lengthy with high-level kickboxing skill. Adesanya stands 6’4” with an 80-inch reach, which gives him a substantial length advantage over most of his opponents at middleweight. Adesanya’s length will not be quite as big of an advantage as he moves up a weight class to face a bigger opponent, but he still will have the edge in reach and height over Blachowicz.

One of Adesanya’s best attributes is his striking defense, which is due in part to his long limbs, which allows him to position himself just outside of his opponent’s striking range. 65% of Adesanya’s opponent significant strikes have not landed, the second best rate among active middleweights and the fifth best rate in the history of the division. Adesanya uses his long arms to stiff-arm opponents and keep them from closing the distance, similar to the way the lengthy Jon Jones operates. Adesanya is also very quick and elusive, which he combines with his length to avoid being hit cleanly. Because Adesanya has strong striking defense, opponents have a difficult time logging significant strike volume. Adesanya has limited opponents to 40 significant strikes or less in seven of his nine UFC fights and has absorbed only about two significant strikes per minute. Even when Adesanya does get hit, it’s often at the very end of the strike due to his distance management, so he does not get hit with the full power of the strike.

Adesanya also has potent offense and ranks in the top 10 among all middleweights in knockdowns per 15 minutes. Adesanya strategically leaves his hands low at times in order to bait his opponents to attack him, where he can launch counters and set traps, similar to what former middleweight kingpin Anderson Silva used to do.

Blachowicz is set to have a significant advantage in weight for this fight, but Adesanya can mitigate the weight difference through distance management. If Blachowicz can’t get close enough to Adesanya on a consistent basis, his weight advantage will play much less of a factor. Adesanya is in strong position to win this fight from range using his technical advantages along with his speed and distance management.

The two most likely outcomes of this fight are Adesanya out-pointing Blachowicz from the outside en route to a decision win (+250) or Adesanya catching Blachowicz with a flush strike that ends the fight by KO/TKO (+130). Since a decision win gives a better payout, taking Adesanya to win by decision is a consideration. Adesanya has won five of his last eight fights by decision and four of Blachowicz’s five UFC losses are by decision. Taking the fight To Go the Distance (+162) also gives plus odds.