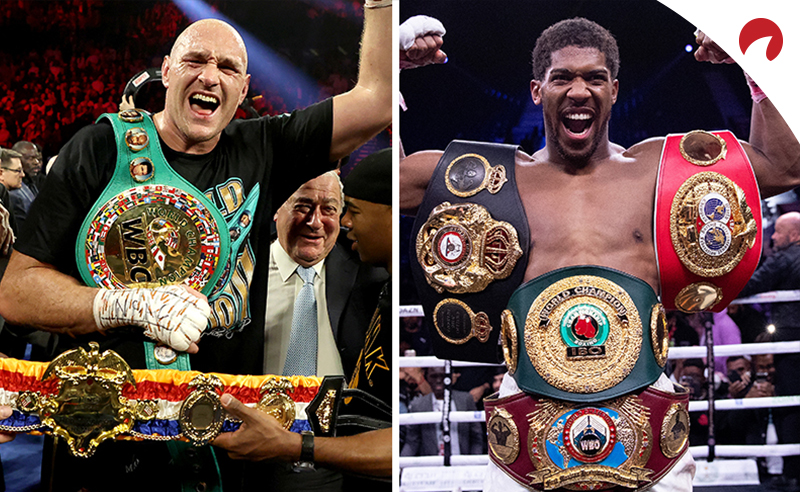 It appears we are getting ever closer to having our first undisputed heavyweight champion since Lennox Lewis in 2000. Tyson “Gypsy King” Fury stopped Deontay Wilder in February to claim the WBC and Ring Magazine titles, setting up a super-fight with Anthony “AJ” Joshua to unify the four major titles. The two have bouts scheduled for late 2020 but have apparently signed agreements to fight in 2021 and we already have odds for their first meeting.

It’s official FURY VS JOSUAR AGREED FOR NEXT YEAR, I got to smash @bronzebomber first then I’ll annihilate @anthonyfjoshua #WEARESPARTANS MASSIVE THANKS TO DANIEL KINNERHAN FOR MAKING THIS HAPPEN. god bless pic.twitter.com/18FfVKfCax

Fury is the -200 favorite in the unification bout with Joshua coming back at +150. As mentioned above, though, Fury still has to settle his trilogy with Wilder and Joshua must defend his three titles against mandatory challenger Kubrat Pulev.

Be sure to check out our How to Bet on Boxing article if you are looking to place a wager on this potential match.

Odds as of June 16 at Bovada

Had this fight been proposed a year ago, when Joshua was on top of the world with a perfect record, holding the WBO, WBA and IBF titles and looking unstoppable, I’m sure the odds would have been flipped the other way. Fury was making his return to the ring, coming off a split draw against Wilder in which he was dropped twice but outboxed the Bronze Bomber for the majority of the bout.

However, over that span, AJ was stopped in his USA debut by Andy Ruiz, though he got revenge in the rematch in December. Meanwhile, the Gypsy King scored three victories, two by T/KO and none bigger than stopping the boogeyman of the division, Wilder.

Many may see value on AJ, who has never entered the ring as an underdog, so seeing a plus sign next to his odds is absolutely enticing. Conversely, Fury was an underdog in both of the Wilder fights but was a heavy favorite in his “tune-up” fights against Otto Wallin, Tom Schwarz, Francesco Pianeta and Sefer Seferi. How will the Gypsy King perform as the close favorite?

Will This Fight Take Place and When Would it Be?

Many boxing fans for years have been frustrated because the top boxers in a division don’t end up fighting in their primes due to mandatory challengers and the unwillingness of promoters to work together – look at Floyd Mayweather vs Manny Pacquiao. It was great to see Fury and Wilder put those differences aside as PBC (FOX PPV) and Top Rank Boxing (ESPN+) co-promoted the rematch. For Fury and Joshua to fight, it would have to be Eddie Hearn and Matchroom Boxing (DAZN) co-promoting with Top Rank Boxing.

Above, Hearn talks about the agreed-upon two-fight contract between Fury and Joshua to crown the undisputed champion. That said, they still have hurdles in front of them, notably a venue, which will hopefully open up soon as the COVID-19 pandemic slows, and of course the scheduled bouts ahead of the two fighters.

I like to take an optimistic approach when speculated fights are announced – maybe that’s the fight fan in me, but I really think we get this fight in early 2021 and then again in late 2021. I don’t believe Wilder will be able to overcome the issues in his boxing skills to outduel Fury. As for AJ’s defense, Pulev doesn’t have a ton of power in his hands so I expect the champ to come out aggressively and take care of business.

How Will This Fight Play Out?

Both of these England natives have the ability to fight a rough and rowdy style where they get into a phone booth and exchange hands. Joshua has done this for the majority of his wins, leading to 21 knockout victories in 23 wins. That said, he tried that vs Ruiz and paid the price, getting stopped in the seventh round. He went back to the drawing board in the rematch, sticking to a more traditional boxing style – sticking and moving and not getting into a war – and cruising to a unanimous-decision victory.

As for Fury, he is known for his slickness in the ring, sliding out of danger using his long jabs to keep his opponent on the outside. He has great conditioning and his herky-jerky style often leaves foes confused about when to throw while he’s constantly touching them with heavy jabs. In the Gypsy King’s dominant performance against Wilder, he took the center of the ring and didn’t take a step back, bullying the Bronze Bomber and landing heavy shot after heavy shot, ultimately stopping him.

I don’t think Fury can physically exhaust Joshua the way he did Wilder because AJ has a bigger frame and can likely hold his own in the clinches. However, in a tactical boxing match, Fury outclasses AJ by a mile, and AJ does tend to get hit flush in many of his fights, which is a dangerous game to play in the heavyweight division. I believe the Gypsy King’s game plan will more resemble the first Wilder fight than the second, piecing AJ up and using his footwork to get in and out without taking much damage.

Fury is an undefeated boxer with a 30-0-1 record, the lone draw coming in his first fight with Deontay Wilder. After returning from a nearly three-year layoff, the Gypsy King is 5-0-1 with three knockouts and was favored in four of those fights.

Here’s a look at the record and betting odds for Fury’s last five fights:

Joshua had his perfect record snapped in a stunning upset loss to Andy Ruiz in June 2019. AJ redeemed himself with an impressive tactical approach in the December rematch, just the second fight he has won via decision in his 24-fight career.

Here’s a look at the record and betting odds for Joshua’s last five fights: