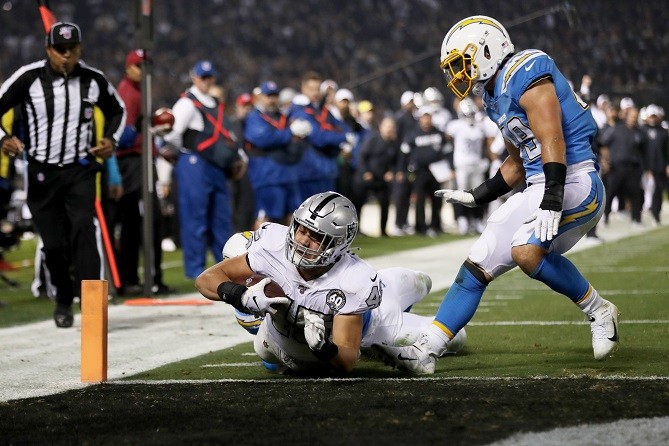 Despite losing three of their last four games, the Las Vegas Raiders are still alive in the AFC playoff race. The Raiders lost badly to Indianapolis 44-27 last week but remain 7-6 overall and still in the running for the No. 7 seed in the AFC. They enter this Thursday night’s AFC West matchup with the Chargers as a 3-point favorite.

The Chargers won for just the fourth time this season beating Atlanta 20-17 at home last week. Los Angeles lost the first meeting of the year with Las Vegas 31-26 back on Nov. 8. Will it be more of the same for the Chargers?

The Chargers have lost each of their last five road games. The big problem is defense. Last week’s win over the Falcons was the first time since the season opener the Chargers gave up fewer than 20 points. L.A. is 26th in the NFL in scoring defense allowing 27.8 points per game. You don’t win many NFL games when your defense gives up nearly four touchdowns per.

Raiders Not Much Better

If you thought defense was a problem in Los Angeles, it’s a huge issue in Vegas too. The Raiders, not long ago, were riding a three-game winning streak. Then, the flood gates opened. The flood gates, in this case, are the Raiders defense which allowed 35 to Kansas City, 43 to Atlanta, 28 to the Jets, and 44 last week to Indianapolis.

The first domino fell after last week’s loss when defensive coordinator Paul Guenther was fired. It’s easy to see why. The Raiders gave up 37.5 points per contest in those four games and needed a Hail Mary touchdown pass on the game’s last play to avoid being beat by the winless Jets.

The Raiders actually give up more points per game – 30.1 – than the Chargers. That could be one of the key indicators for bettors this Thursday night.

Both the Raiders and the Chargers can generate some offense and, ultimately, points. Now, the Chargers only average 19.8 points per game, but that’s not the fault of rookie quarterback Justin Herbert. L.A.’s signal-caller has thrown for 3,467 yards and 25 touchdowns so far this year. The Chargers are fourth in the league in passing yards per game with 270.4.

The problem the Chargers have is converting in the red zone. L.A. converts a touchdown in the red zone just 57.14 percent of the time. In their last three games, that percentage drops to just 50. If they continue to stall in the red zone, the Chargers, who finish the season with three straight AFC West games, will not again this season.

On the other end, the Raiders are 11th in the league in scoring averaging 26.9 points per game. They have a solid running game led by Josh Jacobs (831 yards, 9 TDs) and the veteran Derek Carr leads a more than capable passing game. Of note is the fact that in all but one of the Raiders victories they scored 31 points or more. And, that includes wins over New Orleans and Kansas City. The bottom line is that both of these teams can score.

Rod Marinelli, former head coach of the Detroit Lions, will take over as defensive coordinator for the Raiders. When the Las Vegas defense was put under a microscope after a 45-20 loss to Tampa Bay in Week 7, the Raiders responded by allowing fewer than 15 points in three straight games, all wins.