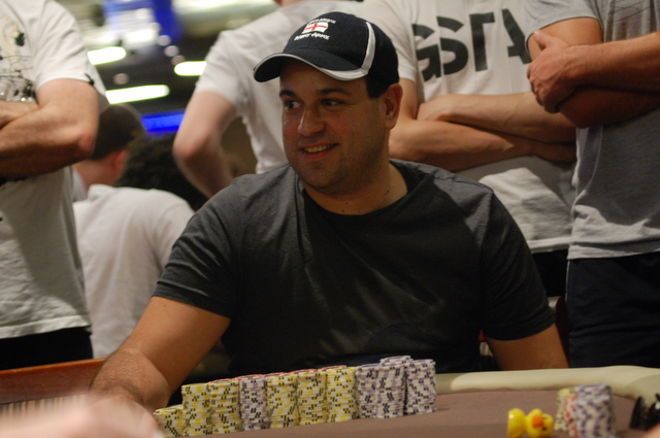 The World Series Of Poker (WSOP) has created some fantastic stories over the years and one such story involved one of our own, the United Kingdom’s Roland de Wolfe.

De Wolfe headed to the 2009 WSOP with two parts of the coveted Triple Crown in place. He won the World Poker Tour Grand Prix de Paris in July 2005 and followed that up with the European Poker Tour Dublin Main Event title in October 2006.

The 2007 WSOP saw de Wolfe come close to completing his Triple Crown with a sixth-place finish in a $2,000 No Limit Hold’em event and an 11th place finish in a £5,250 buy-in Pot Limit Omaha event at the WSOP Europe in London.

Another close call occurred the following year when de Wolfe busted from the $5,000 Limit/No Limit Hold’em event at the 2008 WSOP in fourth. It looked as if de Wolfe would never get his hands on a WSOP bracelet.

He then headed to the 2009 WSOP and made deep runs in a trio of events before the star aligned in the $5,000 Pot Limit Omaha Hi/Lo event.

A field of 198 players bought into what was the 27th event on the 2009 WSOP schedule. It was the first-ever $5,000 PLO8 event the WSOP had run so there was much anticipation about who would enter. A star-studded field was expected and poker fans weren’t disappointed.

Such luminaries as Barny Boatman, Mike Matusow, Mike Sexton, Kathy Liebert, and Chris Bjorin all bought in. As did Jason Mercier, Eli Elezra, Chris Ferguson, Jeff Lisandro, and Bruno Fitoussi. The field read like a who’s who of poker.

85 WSOP bracelets to be won online this summer

Only 18 players received a payout and it was Mickey Appleman who was the unfortunate soul to burst the money bubble. Appleman was short stacked and shoved from under the gun with

board sent Appleman to the rail and the remaining 18 players into the money.

Nine of those in the money players fell by the wayside before Day 2 concluded. Jeff Lisandro and Andy Bloch were among the casualties late into Day 2.

The final table of nine players returned to the Rio All-Suite Hotel & Casino on June 15 and de Wolfe found himself sandwiched between Antony Lellouche and Alex Kravchenko, which was far from ideal. Andrew Black, Robert Campbell, John Racener, and chip leader Scott Clements were among the other finalists.

Lellouche was the final table’s first casualty, crashing out in ninth-place for $29,965. Armando Ruiz joined him on the sidelines soon after before the elimination of a certain John Racener, then a relatively unknown quantity, fell in seventh. Racener would go on to finish second in the Main Event the following year.

Andy Black saw his tournament end in a sixth-place finish and in cruel circumstances. Black and Campbell got their chips into the middle with similar hands. Black held

. A chopped pot looked the most likely outcome but the [s]

board put paid to those plans.

Clements was still the chip leader and in control of the tournament. He extended his lead when he sent Kravchenko to the showers in fifth place.

De Wolfe made up some ground by helping himself to Campbell’s chips but Clements still had twice as many chips as the Triple Crown chasing Brit.

On this day with Negreanu and Seidel

The tide turned when de Wolfe won a massive pot from Clements, courtesy of a spade flush on the river. De Wolfe’s

looked in serious trouble against Clements’

board propelled de Wolfe into the chip lead.

Clements and De Wolfe clashed again shortly after that hand and it resulted in Clements crashing out in third for $101,064.

This gave de Wolfe a huge chip lead over Brett Richey but victory was far from a done deal, especially as de Wolfe admitted he’d hardly played any PLO8 in his career.

The moment de Wolfe and the British poker community had been waiting for finally occurred at just before 3:00 p.m. on June 15, 2009. it was heads-up in a raised pot on a

turn failed to alter the holdings, and the

De Wolfe came close to a second bracelet in 2010 with a fourth-place finish in the £10,350 buy-in WSOP Europe Main Event in London, which was won by fellow Brit James Bord.

The last we saw of de Wolfe in action was in December 2010 when he final tabled the A$6,300 Main Event at the Asia Pacific Poker Tour Sydney festival. He’s since vanished from the poker world, although there are rumours he still plays but in private cash games. Whatever de Wolfe is up to these days, nothing will top the day he became a Triple Crown winner.