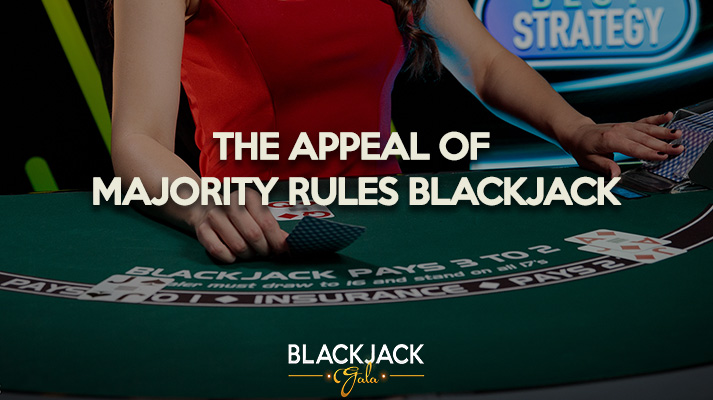 The online casino revolution brought about an increasing number of variations of Blackjack. From Multi-hand and Blitz to Common Draw, players these days have options you couldn’t even dream of in the past. Live table blackjack has proven to be especially fertile for such innovations.

Majority Rules Blackjack is one of the more controversial of such novelties. It has a fairly simple premise of sharing decisions with other players. If giving up control sounds bad to you, this is probably not the blackjack variant for you.

What is Majority Rules Blackjack?

It’s a variant of live blackjack in which decisions are made based on a vote between several players. It goes by many names – Majority Vote Blackjack, Best Strategy Blackjack, and so on. All of these names denote the same thing, most famously found in Majority Rules Speed Blackjack by Playtech. Although the basic concept sounds simple, there’s a bit more to it.

Tables for such live blackjack games have an unlimited number of seats. Like in Common Draw Blackjack, only one hand is played and it decides the outcome for all players. Now, unlike Common Draw, you don’t get to make decisions independently. Depending on how many players are at the table, you either vote on it or the dealer calls the shots.

Ideally, you’ll want a table with 3 or more players. If that’s the case, you’ll get a chance to vote on each decision. These can be to hit, stand, double, split – all the usual. The moment one option is backed by 50% of bought-in players, the decision is made. If no option can get 50% of the vote, the call is deferred to Best Strategy rules.

Best Strategy is where this variant gets its controversial reputation. If there are fewer than 3 players at the table, the move is instead decided automatically. This also happens if none of the options has more than 50% of the vote. This is done according to the Best Strategy ruleset, with pre-determined guidelines of what to do in which situation. On one hand, these tend to be calls with the best possible RTP. On the other, you get zero participation. Note that these optimal strategies can include decisions to Double or Split.

The rest of this type of blackjack is pretty much identical to any other live blackjack game. In other words, the only difference is what we discussed above. So now that you know how to play Majority Rules Black, the only question remaining is why.

The overwhelming theme of this game is a lack of direct impact. Serious blackjack players will immediately object to this, and they have a point. However, there are some advantages that need to be looked at as well.

First of all, while most gamblers think they have it all figured out, the majority are simply wrong. Think of it this way – if every blackjack player out there was actually smarter than the casinos, we wouldn’t even have online casino games. The house always wins. That said, there is such a thing as the optimal blackjack strategy. Even if it doesn’t necessarily guarantee success, it’s statistically better than what most players are doing. In their Majority Rules Blackjack game, Playtech claims to follow these exact guidelines.

Alternatively, you can rely on other players’ experience via the voting mechanic. Remember that time you watched the person next to you clean the house out? This is your chance to mooch off of their skills! Of course, this can be a double-edged sword. A bad teammate can end up hampering your game with bad judgement. It all depends on the other players at the table, which comes down to luck.

This also brings up another point – the multiplayer gameplay. It’s not often that you get a chance to work as a team in an online casino game. It can be an exhilarating experience to team up, make new friends, and play against the casino together!