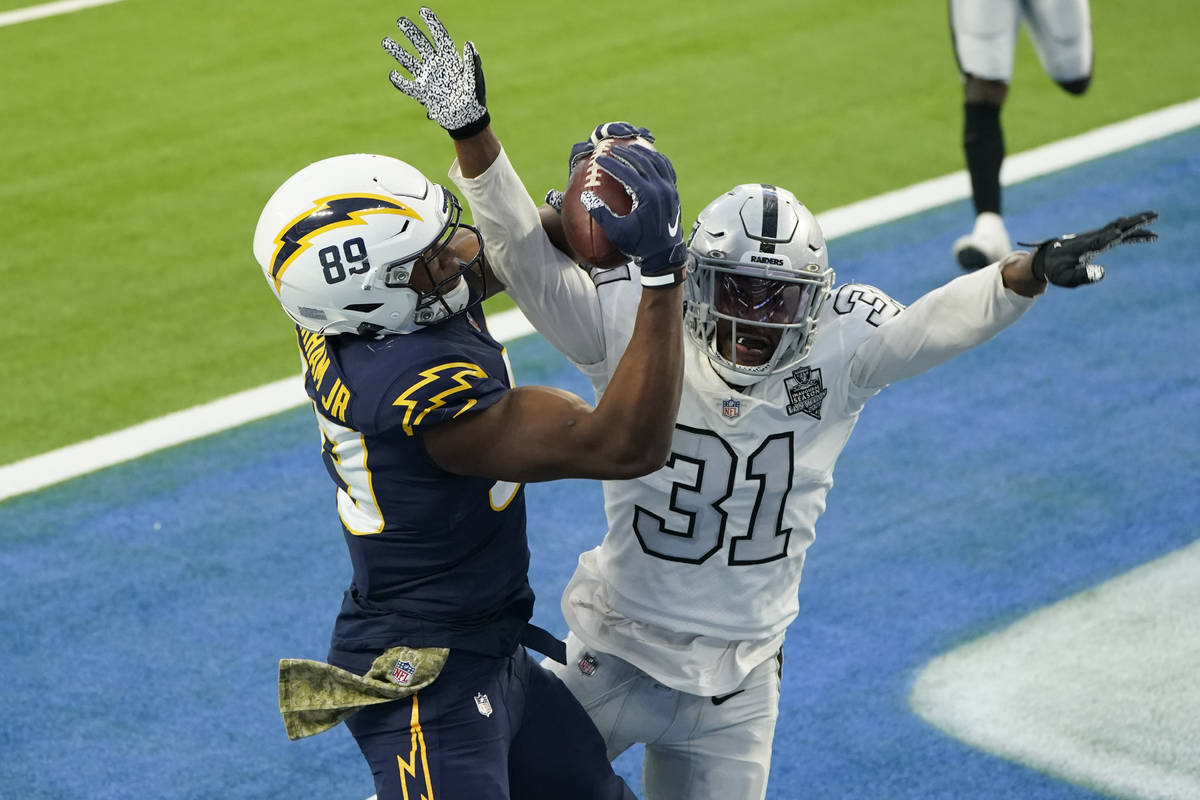 The last time the Raiders played the Los Angeles Chargers, the final play produced one of the loudest cheers in Las Vegas sportsbooks this season.

On Nov. 8, the Raiders clung to a 31-26 lead with one second left and the Chargers at the 4-yard line. Justin Herbert lofted an apparent touchdown pass to Donald Parham Jr. for a Los Angeles victory, but a replay review showed he didn’t hang onto the ball.

The Raiders won and covered as 1-point road favorites, much to the delight of bettors, Sunset Station sportsbook director Chuck Esposito said.

“It was one of the two loudest eruptions that I’ve heard in the book all year,” he said.

Sportsbooks needed the Chargers that day, and that will be the case when the teams meet again Thursday in Las Vegas, Esposito said. The Raiders are consensus 3-point favorites over Los Angeles. The total is 53½.

“We have seen an early push of both respected and public play on the Raiders,” Esposito said.

That comes despite the Raiders (7-6) having lost three of four to fall to the fringe of the playoff race. They were blasted by the Colts 44-27 at home Sunday, and defensive coordinator Paul Guenther was fired after the game.

Nevertheless, Esposito said the public will back the the Raiders as small home favorites in a must-win game if they want to reach the postseason.

The Raiders have faced a difficult home schedule this season. They were underdogs to New Orleans, Buffalo, Tampa Bay, Kansas City and Indianapolis and lost four of the five, covering in two of them.

In the only home game in which the Raiders were favored, they blasted Denver 37-12 on Nov. 15.

“So when they’re playing some of the lower teams, like they are this week against the Chargers, my feeling is that we clearly will be Charger fans when this game kicks off,” Esposito said.

“Most of the money is on the Raiders, but the sharps are very happy to take 3½ when it’s available,” he said via text message.

The sportsbooks that still had 3½ available Wednesday went down to Raiders -3. The Golden Nugget, Station Casinos and William Hill still have the line shaded toward the Raiders at -3 (-120). Circa Sports is shading the line toward the Chargers at +3 (-115). Other books are at 3 with -110 on both sides.

As for the total, Esposito said he expected the public to bet the over, which is 9-3-1 in Raiders games this season, though the total has moved from openers as high as 55 down to 53½.