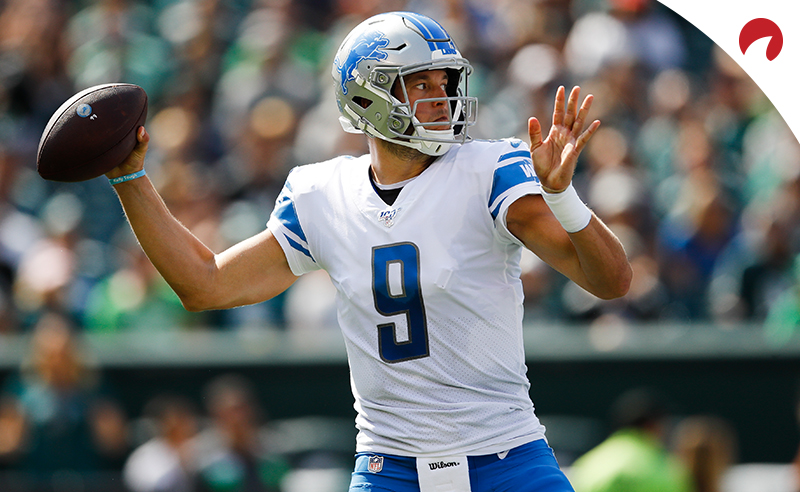 Matthew Stafford has spent 12 seasons in the NFL, all of them with the Detroit Lions, but it was announced last week that the Lions and Stafford have mutually agreed to part ways.

The quarterback, taken first overall by Detroit back in the 2009 NFL Draft, has played in just three playoff games in his career, losing each one.

Now online sportsbook BetOnline has released odds on where Stafford will play next season, with the San Francisco 49ers as the +100 betting favorite, followed by the Indianapolis Colts (+350) and the New England Patriots (+500) to round out the top three teams on the board.

Odds as of January 28 at BetOnline

Lots of Intrigue Around Stafford

There will be plenty of teams interested in the services of Matthew Stafford this offseason. Stafford, who was selected to the Pro Bowl back in 2014 and was the NFL Comeback Player of the Year in 2011, was the fastest player in league history to reach 20,000 career passing yards.

The Lions finished a disappointing 5-11 in 2020, but Stafford had one of the best statistical seasons of his career with 4,084 yards passing and 26 touchdown passes to just 10 interceptions.

Is San Francisco A Viable Option?

The San Francisco 49ers are the +100 betting favorite, and that to me seems a bit of a stretch. There are rumors that Kyle Shanahan and the 49ers are looking to explore options to trade current quarterback Jimmy Garoppolo. Garoppolo has been injury-prone over the last few seasons but I don’t think that they will go with a 32-year-old quarterback in Stafford.

I think the 49ers will look to either keep Garoppolo or try to acquire a younger franchise quarterback such as Sam Darnold or Deshaun Watson. So although the 49ers are the betting favorite as a landing spot for Stafford, I would avoid San Francisco.

The team that I think would be a perfect fit for the quarterback from Tampa, Florida, is the Indianapolis Colts, who are second in the Matthew Stafford odds at +350.

The Colts are in search of a quarterback who could be their leader for several years, and at 32, there is still plenty of football left in Stafford’s tank. He was sacked 38 times this season, the seventh-highest number in the league, so there would be an appeal for him to go to a team that has a dominant offensive line like the Colts.

Having An Offensive-Minded Coach

Stafford has had five different head coaches and a number of offensive coordinators over his tenure in Detroit, so going to a place like Indianapolis where Frank Reich, a former quarterback, would be calling the plays presents another reason why the Colts would make sense for Stafford.

Colts general manager Chris Ballard has been aggressive over his four years in Indianapolis and would be willing to trade draft capital to land a quarterback of Stafford’s pedigree. They also have the cap space to afford Stafford, who has two years left on his contract.

The Colts have a dual-threat ground game in Jonathan Taylor and Marlon Mack, not to mention top wideouts T.Y. Hilton and Michael Pittman Jr. For most of Stafford’s career, he hasn’t had a great run game to help him, and he’s been asked to throw the ball 40 to 50 times a game. The move makes the most sense for both sides and seems like the right choice for Stafford.