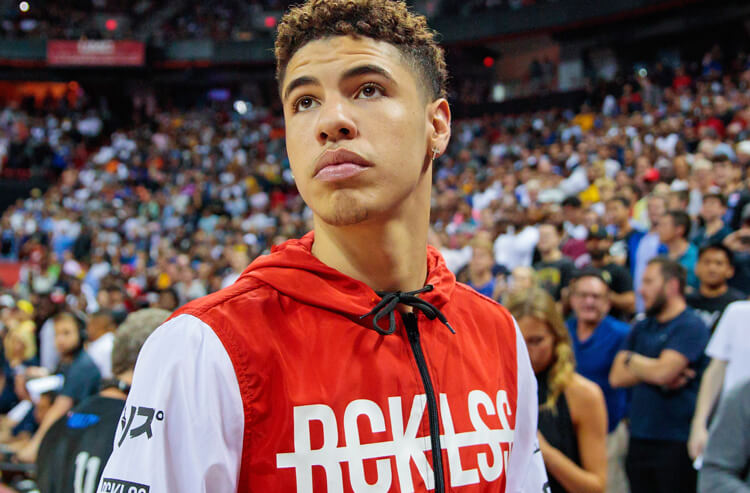 LaMelo Ball (+400) landed in an ideal situation for Rookie of the Year candidacy, on the identity and expectation-less Charlotte Hornets.

NBA Rookie of the Year odds have hit the board with the 2020 NBA Draft now complete. As the NBA weaves through a turbulent and truncated offseason, the flock of first-year imports will have to adjust to the big leagues without the typical Summer League warm-up.

Let’s dive into the early NBA ROY odds, as we get set for what promises to be another very unique NBA season.

Who is the Favorite to Win NBA Rookie of the Year?

No. 3-overall pick LaMelo Ball sits as the early favorite to win Rookie of the Year at +400.

Of the Top-3 prospects – who largely separated themselves from the rest of the draft class – Ball absolutely landed in the best spot for ROY purposes, on the identity-less Charlotte Hornets.

Ball will get all the touches and opportunity he can handle, giving him plenty of chances to flash his transcendent playmaking, while also developing his scoring touch against NBA-level defense. There will be some bumps in the road, but he’ll put up big numbers, which usually fuel a Rookie of the Year candidate, regardless of efficiency.

Second on the odds board is the Minnesota Timberwolves’ Anthony Edwards. Edwards, the draft’s first overall pick, is seen as an NBA-ready scorer, but won’t benefit from the free reign Ball will have in Charlotte. The Wolves will be aiming to compete in 2021, driven by Karl-Anthony Towns and D’Angelo Russell, and rookie touches may be harder to come by with expectations rising.

Tied for third on the odds board are the Golden State Warriors’ James Wiseman and the New York Knicks’ Obi Toppin at +600. Wiseman is in a precarious situation for a rookie, currently the only natural center on Golden State’s roster. In picking Wiseman – their best fit – the Warriors seem less likely to trade the pick, meaning Wiseman will be suiting up for a would-be contender, a status further complicated by Klay Thompson’s season-ending Achilles tear.

Toppin, the reigning Wooden and Naismith Awards winner, will have plenty of opportunity with the barren Knicks, but will have to navigate in what’s been the NBA’s most toxic environment for most of the past two decades. He’ll also possibly need to do so without a traditional playmaker, as New York’s point guard spot is currently an utter mess.

Rounding out the Top 5 is Killian Hayes of the Detroit Pistons at +700. Hayes, just 19 years old, is considered a bit of a raw project, but has solid enough fundamentals to have topped some mock drafts, and will likely be handed the keys to a Pistons squad on the verge of a full teardown.

Odds to Win NBA Rookie of the Year

Most sportsbooks will display odds in the American format as listed above. As last season progressed, with Ja Morant having been a huge favorite, his odds had a minus (-) sign ahead of the number:

This means that a bettor needs to wager $500 to win $100. Other candidates with worse odds would have a plus (+) sign ahead of the number. Early in the season, before any clear favorite is established, betting options will be listed as such:

If American odds aren’t your thing, simply use our odds converter to switch the odds to decimal or fractional format. Most online sportsbooks also give you the option to change the odds format that you see.

NBA Rookie of the Year History

Where Can I Bet on NBA Rookie of the Year Odds?