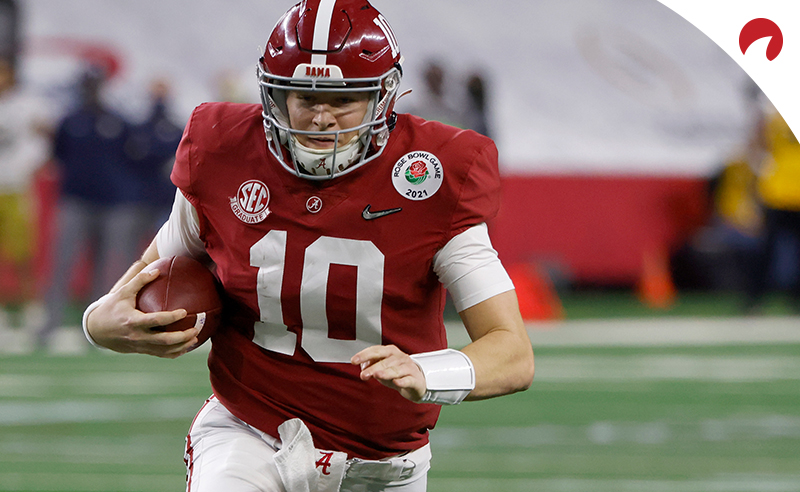 A wild and wacky 2020-21 college football season is coming to an end when the No. 3 Ohio State Buckeyes collide with the No. 1 Alabama Crimson Tide in the CFP National Championship Game on January 11 at Hard Rock Stadium in Florida.

The 12-0 Crimson Tide are set as an 8-point favorite to win the national championship, with the total soaring at 75.5 points. Be sure to read our full betting preview for this matchup. However, the purpose of this article is to take a look at some of the prop betting options available to wager on for this game.

Online sportsbook Bovada has released many national championship game prop bets for you to try your hand at, including alternate spread, totals and more precise options such as the first scoring method and what the first turnover will be.

There are two prop bets that I think are worth a stab for this game, though there are many that intrigue me.

The second prop that I like providing a little more value is for the “longest touchdown yardage in the game” at OVER or UNDER 67.5 yards with the OVER at -115 and the UNDER at -125. Personally, with playmakers all over the place like Heisman Trophy winner DeVonta Smith of Alabama and explosive Ohio State running back Trey Sermon, I wouldn’t be surprised if someone breaks through for a quick strike.

Here’s a look at the full list of prop odds for the national title game between Ohio State and Alabama.

As is the case with most MVP races whether it be for a season or game award, the quarterbacks are almost always the favorites and the same can be said for this year’s national championship game, with Mac Jones (ALA) and Justin Fields (OSU) the top two names on the list.

That said, in a year in which a wide receiver won the Heisman Trophy, I’m going to look elsewhere for my MVP pick. There are three names that I like on this list, each with odds of +1000 or longer. The first two are somewhat contingent on Ohio State winning the national championship: RB Trey Sermon at +1000 and WR Chris Olave at +1600.

A similar story could be written about Olave, who is Fields’ No. 1 target. Olave missed the Big Ten championship game and it was noticed as Fields wasn’t in top form. But the junior from California returned to collect six catches for 132 yards and two majors vs Clemson. A No. 1 WR at +1600 – why not?

My third pick is a risky one but potentially a diamond in the rough. I’m looking at Jaylen Waddle at +1600. The Alabama wide receiver was injured on the opening kickoff of the Crimson Tide’s fifth game of the season against Tennessee. Prior to that contest, Waddle had secured 25 catches for 557 yards with four touchdowns in just four games and was the No. 1 receiver before DeVonta Smith ascended to that role and took home the Heisman. Currently, Waddle is practicing and is a game-time decision for Monday, but if he’s healthy and in the lineup, he may turn heads and cash at 16/1.

Longest Touchdown Yardage In The Game

Will a Special Teams or Defensive TD be Scored?

Will The Team That Scores First Win The Game?

The First Score Of The Game – Exact Outcome

Will There Be a Score In The First 5:30 Of The First Quarter?

Will Either Team Score 3 Unanswered Times In The Game?

Will The Game Go To Overtime?

The First Turnover Of The Game Will Be?

Team To Call The First Timeout In The Game

Team To Get The First Penalty In The Game

Online sportsbook BetOnline also has a great list of national championship game prop options that you can wager on, including some fun options listed below.

Will Either Team Take Lead After Trailing By 15 Points Or More?

Which Will Be Said First?

Will Both Teams Score At Least 30 Points?

Will Either Starting QB Not Finish The Game?

Will Either Team Score 50 Or More Points?