No snap back into form for Crocodiles

Nimes have been Ligue 1’s weakest side for some time and that makes Strasbourg a good pick to run out comfortable victors when the sides meet at Stade de la Meinau this week.

The Crocodiles, as Nimes are known, rounded off 2020 with a calamitous run of nine defeats from their final 11 matches (W1-D1-L9).

The win and draw they picked up were fortunate, and their shortcomings were laid bare when they were outplayed and lost 3-1 at home to Dijon in a clash of the bottom two on their final outing of the year.

Injuries haven’t helped but serious organisational problems off the field and a lack of quality on it – largely down to last summer’s unconvincing transfer dealings – have put manager Jerome Arpinon and his side in a perilous position.

Given Nimes’ limitations, it’s hard to see how the hosts can avoid defeat against a Strasbourg side that have better players in most areas of the pitch. 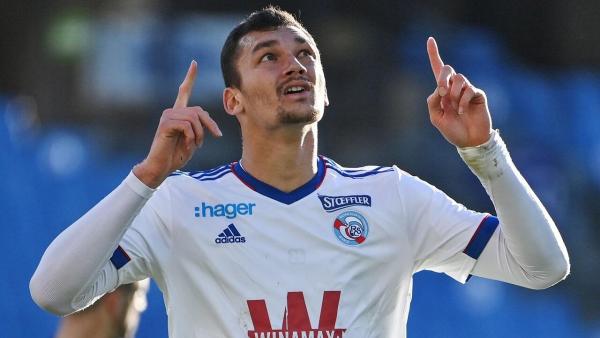 Strasbourg wobbled towards the end of 2020, losing their final two games against Bordeaux (0-2) and PSG (0-4). Yet the general improvement in Strasbourg’s form from mid-October onwards ought to be taken into account.

In Ludovic Ajorque (pictured below) and Habib Diallo Strasbourg have two strikers each capable of scoring 10 to 15 goals a season. The pair are on six and five goals respectively at the moment and will relish the opportunity to add to their tallies against a Nimes side that has the division’s worst defensive record.

Strasbourg are 1.68/13 to win so the hosts are a better bet on the Asian Handicap.

With our selection you’ll get your stakes back if Strasbourg win by one goal and make a profit if they win by two or more goals. For a full guide to Asian Handicap betting, click here.

As long as the short winter break hasn’t disrupted Lille’s state of mind the hosts will be a good bet to collect all three points at home to Angers on Wednesday night.

Christophe Galtier’s hosts played some tremendous football during the first-half of the season and look like genuine title contenders.

Individually and collectively they’ve been excellent all over the pitch in most of their matches and head into this game with good team news, too.

At home Lille have especially impressed: their Stade Pierre-Mauroy record is W6-D3-L0, and the three teams they dropped points against (Rennes, Lyon, PSG) are all markedly stronger than Angers.

With no Europa League football to deal with until next month and the French Cup postponed for the time being, Lille are free to concentrate on their title campaign.

The hosts will be keen to make the best possible start in 2021 as they look to continue their challenge at the top.

Angers’ excellent away record (W4-D2-L2) will be a source of confidence for the visitors but a relatively kind fixture list has been a key factor in them picking up so many points on the road.

They recorded two of their four wins against current bottom two Dijon (1-0) and Nimes (5-1), and suffered heavy defeats when facing better sides PSG (1-6) and Montpellier (1-4).

Lille are clear favourites to win, but their 1.68/13 price won’t appeal to everybody. The hosts are worth backing at bigger odds on the Asian Handicap market, however, thanks to their habit of looking to win convincingly rather than sitting on a one-goal lead.