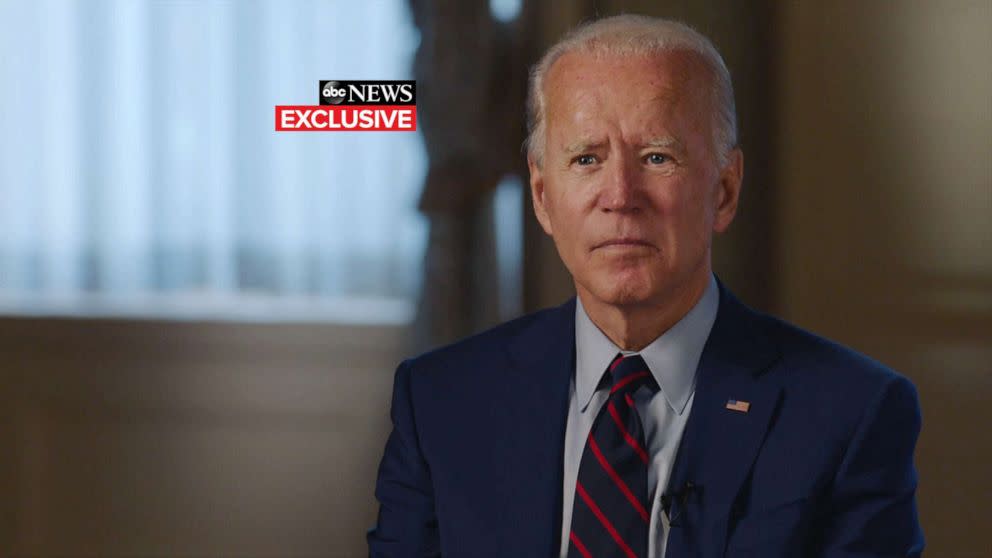 In an exclusive interview with ABC “World News Tonight” anchor David Muir, former Vice President Joe Biden responded to President Donald Trump’s claim that the only way he can lose the election is if it is “rigged,” and said the American people “will not let” Trump stay in office if he is defeated in the 2020 election.

“The American people will not let that happen … no one’s going to allow that to happen,” Biden said, when Muir pressed Biden whether Trump could in fact try to stay in the White House even if he loses November’s vote as some Democrats have feared.

Biden had previously acknowledged that he had thought about this possibility.

During the interview, which was conducted in Wilmington, Delaware, after the Democratic National Convention, Biden and his running mate, Sen. Kamala Harris, D-Calif., reacted to testimony from Postmaster General Louis DeJoy before Congress that same day.

Pressed on whether or not she believes DeJoy’s promise that every mail-in ballot will be delivered and processed on time to count in the November election, Harris said that she did not.

“I don’t necessarily believe anything that he has said when he says that what he has done has had no effect. Because I know it to be true that small businesses around our country in these last days [since] he has withdrawn resources from the Postal Service, are suffering,” Harris told Muir.

“I’ve heard about seniors who rely on receiving their medication in the mail on time, and in addition to whatever they’re suffering physically, they are worried — to their bone — that their medication may not come in time for them to take it properly,” Harris added.

Muir and “Good Morning America” co-anchor Robin Roberts conducted joint interviews with Harris and Biden — their first since accepting the Democratic nomination — which was featured in a special edition of “20/20” called “The Ticket: The First Interview,” which aired Sunday on ABC.

“Do you think the president is deliberately trying to slow down the mail-in vote?” Muir asked Harris.

“I’m not gonna spend too much time getting into his brain. I’m just watching what he does and the effect,” she told Muir.

Biden pointed to President Trump’s interview earlier this month on Fox News Business during which he appeared to indicate if Congress and the White House are not able to reach a deal on funding for the U.S. Postal Service, Americans from every state will not be able to vote by mail.

“He has said he wanted to defund the Post Office at one point because he does not want people to be able to vote by mail. That’s what he said,” Biden told Muir.