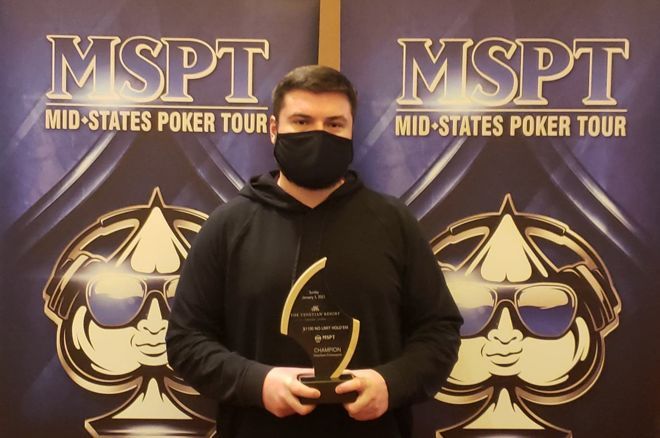 James Carroll shined at Venetian again, but unlike last time, he didn’t have to share the spotlight after a chop.

Two years ago in February, he chopped a big DeepStack Extravaganza event here for $184K apiece. At MSPT Venetian $1,100 this time around, after a small saver that still left the vast majority of the first-place money in play against William Chao, Carroll came out on top for the trophy and $180,850 in a field of 1,009.

It’s step one in recapturing the momentum from his stellar 2019 — he cashed for just shy of $1.3 million — that was halted by coronavirus. He said it was just his fourth live tournament since the lockdowns hit and put the kibosh on most live poker.

“It’s nice to stop that online grind,” he said. “Probably the best I’ve ran in a tournament in a single day in my life. Just had a lot of big hands and got paid a lot.”

Carroll got some heat early in the day and was cruising with a big stack of about 100 blinds, but where he really started to take over was at the final two tables. There, he opened constantly and swept up blinds while also showing up with some big hands when players tried shoving on him, and he soon had about 20% of the total chips with the final table still yet to convene.

From those final two tables on, it seemed Carroll was locked in a collision course with Chao. Despite being in second place, Chao still had almost double the chips of the third-place Bill Lewis when the final table went to battle.

Chao tested Carroll early with a four-bet and did his best to keep pace even as Carroll collected a couple of knockouts, of Lewis and Veselin Dimitrov.

In fact, Carroll did slip into second momentarily, but he recovered with the good run he referenced when he three-outed Daniel Sammarco shoving king-three suited into queens in a blinds battle. He then dispatched Daniel Jones — it was a day of near misses for Daniel Joneses as a more famous one bubbled the NFL playoffs — and looked to be in complete command with a big lead heads up against Chao.

However, Chao let him know he wasn’t going quietly with a three-street value play holding top pair on a pretty coordinated board. That put him down only about 14 million to 10 million.

With deep stacks, the two opted to look at the numbers and quickly agreed to a $10K saver that tightened the payouts a bit.

“He’s a super tough player,” Carroll said. “So, I didn’t mind doing a small saver. But, I wanted to get some heads-up practice in live and make sure the money still meant something.”

In the end, he wouldn’t get much practice at all. He turned on the aggression with a couple of three-bets that got through, and when Chao three-bet him, Carroll four-bet jammed ace-nine. Chao opted to go with ace-six suited and was left wanting when each player paired his ace but the kicker of Carroll played.

Carroll said it’ll be onwards for him as he plans to play the WPT in Florida next, and he’ll presumably be right back to his adopted home city for the following WPT events in March at Venetian.