Live poker has been shut down for over six weeks in almost every territory around the world. Since Coronavirus forced the game back inside people’s homes, poker has continued, however. Online tournaments have welcomed players who might usually have ventured outside into their virtual lobbies and poker brands such as PokerStars, partypoker and GG Poker have all hosted big events in the last few weeks. 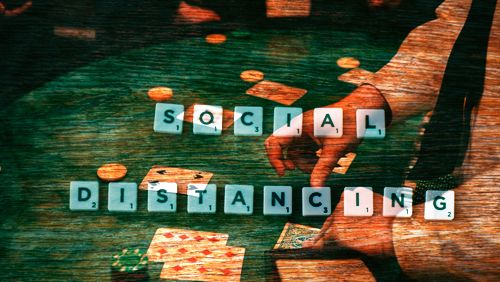 With the looming possibility that Las Vegas has been secretly preparing to reopen venues such as casinos in order to maintain an economy in a city built on the entertainment and gambling industries, the obvious question has been whether live poker will come back and if so, how and when?

Plans to reopen poker’s live game are obviously riddled with issues. How do you keep players from transmitting the Coronavirus when the cards, poker chips and dealer button are all potentially contaminated?

A glimpse at the equipment needed to restrict players from being in contact and maintain a social distance has led to some poker players commenting disparagingly on the visual for what would be an incredibly complicated physical set-up, although Phil Galfond of Run It Once chose to focus on what many players thought; that playing online would be much, much easier than resorting to this sort of table sitting in your local casino.

This table is a good start!

Replace the flimsy plastic dividers with the sturdy walls of people’s homes.

Then legalize & regulate safe online poker across the USA. pic.twitter.com/pCGBZPH8hr

As Daniel Negreanu discussed in the latest episode of Dat Poker Podcast, what it would take for players to retake their seats at poker tables around the world isn’t a simple question. The very future of how a casino might look would be very different, as demonstrated by this Tweet about casino games. Can you imagine this sort of set-up for a live poker tournament and how long it would then take to reach a conclusion?

With poker likely to return with a maximum of four poker players to every table, there are huge logistical and financial implications of such restrictions. Casinos are already talking of having to employ one dealer to shuffle up and deal and another to disinfect the currency and controlling elements of actual gameplay. Again, consider how long this sort of process would take.

From a financial position, casinos may be making no money at all at present, but any freelance or ‘zero hours’ casino staff aren’t costing them any money. Two dealers per table with only four players paying rake would both double the outlay and halve the income at each table, essentially chopping the money casinos make down to 25% of pre-COVID-19 profit margins.

The talk of poker returning, however crazy it might sound to imagine, is not restricted to theory at present. The Nevada Gaming Control Board released health and safety policies that are new as of last Friday, which include the limited seating that would need to be strictly enforced.

Live tournament poker would, essentially, still be in quarantine. Cash games would need to be a very high level for poker to turn a profit, unless rake is raised, which would in turn scare off players anyway. Even high rollers are currently able to play big buy-in tournaments throughout May on GG Poker in the WSOP Super Circuit Series or in other big events like SCOOP and the forthcoming WPT Online Series. Poker Central host a Super High Roller Bowl from May 23rd to June 1st that is sure to draw the eye of many high rollers.

There have been – and will be – more big events at PokerStars, partypoker and other sites that make it possible for those in lockdown to maintain their poker playing without leaving the safety of their own abodes. The incentives needed to drive people out of their homes to casinos would only be big enough for players at a level which falls well below profit for casinos themselves.

The prevention of large social gatherings is one that the whole world will find difficult to implement as society adjusts to what has to be a new way of life to rid the world of COVID-19. As has been seen as recently as last week in Germany, relaxing of social distancing measures can have a catastrophic effect in no time at all, the reinfection of a population happening in days, not weeks.

Things aren’t as simple as casinos throwing open their doors and welcoming poker players – and other gamblers – into their cavernous gaming rooms. Before even thinking about reopening, any establishment has to submit a plan outlining how they’ll comply with the new rules and regs. Then they have to wait a week before they can welcome anyone into their building.

From personal protective equipment (PPE) to face-masks, regular handwashing schedules and ramped-up cleaning rotas, the efforts that will have to be made by casinos in re-opening are huge.

Here is the most important paragraph of the proposal in full.

Las Vegas properties have been closed since mid-March under the terms set out by Governor Steve Sisolak. However, with Las Vegas Mayor Carolyn Goodman going on something of a rant about how Nevada’s business closures are “killing” the local economy, there is a political stand-off to match the one facing poker players on both sides of the argument.

The post Is It Possible to Socially Distance Live Poker? appeared first on CalvinAyre.com.