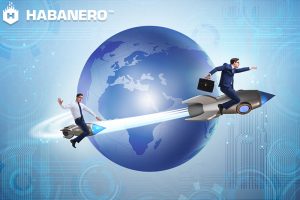 As part of a recently signed deal, GrooveGaming will integrate Habanero’s ever-growing portfolio onto its platform.

GrooveGaming’s content aggregator offers more than 4,000 titles from some of the industry’s biggest suppliers. The plug-and-play platform is loaded with diverse slots, virtual sports, and live casino games.

Habanero’s commercial agreement with GrooveGaming follows a host of key partnerships signed by the content maker in recent months. These deals have helped the company expand across Europe and the lucrative Latin American region as it looks to build on a record-breaking 2019.

Earlier this year, Habanero was fully certified by Spanish gambling regulator DGOJ, a move that paved the way for the company to take 41 of its gaming titles as well as its set of promotional tools live in the Spanish iGaming market with a number of leading locally licensed operators.

Commenting on their partnership with GrooveGaming, Habanero Head of European Business Development Arcangelo Lonoce said that they are delighted to go live with “a prominent aggregator offering a wealth of outstanding content.”

Mr. Lonoce went on that their latest commercial deal fits perfectly with Habanero’s expansion plans and would help his company deliver its innovative portfolio to “a burgeoning global fan base.”

GrooveGaming COO Yahale Meltzer added that they “stand ready to meet the ever-growing demand among players around the world for fresh entertainment experiences” and that teaming up with Habanero would help them do exactly that.

The GrooveGaming COO further noted that they continue to add strong iGaming content to their existing offering and that the Habanero integration “adds additional spice to what is already a truly diverse and rewarding portfolio.”

GrooveGaming has had busy few months during which it has announced several key partnerships. In April, the aggregator announced a deal with Asia-focused iGaming provider QTech Games in a move that would help GrooveGaming venture further into the lucrative Asian market.

Last month, the content aggregator announced a strategic alliance with Kalamba Games. Under the deal, GrooveGaming took Kalamba gaming titles to deliver them to its network of operator partners. The integration included hit titles such as Caribbean Anne, Pyro Pixie, Doctor Electro, Miami Bonus Wheel, Joker Max, and Big Bounty Bill, among others.