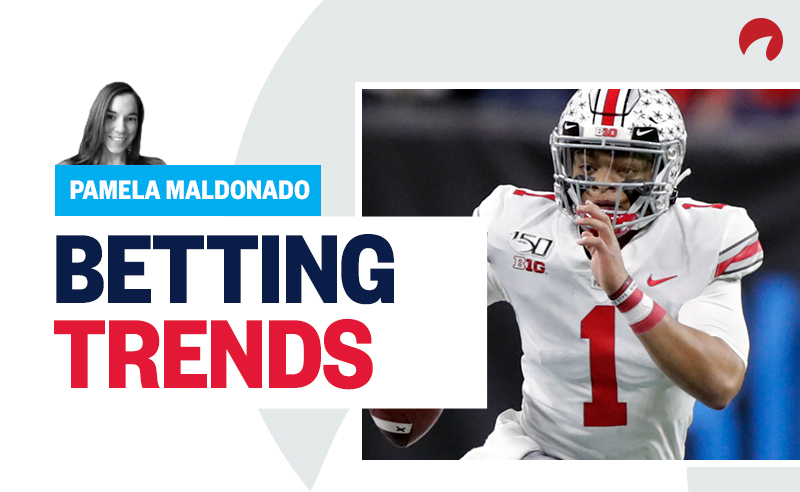 Trends can be a helpful tool for handicapping. They may not act as a be-all and end-all but they could be the icing on the cake if you were already leaning to one side or they could even help you lay off a game.

This week is an interesting week for college football. We have a mixed bag of write-in games, regularly scheduled games, and ten conference championship games. Winning the conference is cool but for some teams, these matchups have major implications in terms of the odds to make the College Football Playoff.

Before placing your bets, take a look at how each team performed this season both against the spread and on the OVER/UNDER. Plus, we present some trends that could be useful in each specific matchup.

Need to know: If one or both teams cannot play in the championship games, the game won’t be played and the team ranked highest in the College Football Playoff rankings will be considered the AAC champion for New Year’s Six Bowl purposes. That team would be Cincinnati.

Need to know: If Clemson wins, Notre Dame could drop in the playoff rankings but will likely still remain in the top four. If Notre Dame wins, Clemson would drop out of the top four and likely end up in the Orange Bowl as the conference’s New Year’s Six representative.

Need to Know: If Ohio State wins, they are likely to make the College Football Playoff. However, the defeat will need to be a convincing win to get the CFB committee to put them into the playoff ahead of teams with eight, nine, and 10 games played. No Big Ten team has ever won four-straight outright conference championships. Ohio State can do that with a win.

Need to Know: This is Iowa State’s first appearance in the Big 12 title game. Oklahoma has won the last three. These two already met in early October where Iowa State defeated Oklahoma 37-30.

Need to know: This is Marshall’s first championship appearance since defeating Louisiana Tech 26-23 in the 2014 title game. This is UAB’s third consecutive appearance in the title game. Last year, the Blazers lost 49-6 to Florida Atlantic. Marshall was 7-0 before being upset by Rice two weeks in a shutout 20-0 loss.

Need to know: This is Ball State’s first conference title appearance since 2008, where they lost 42-24 to Buffalo. This is Buffalo’s third appearance, last being in 2018 losing 30-20 to Northern Illinois. Buffalo running back Jared Patterson tied the FBS record for rushing touchdowns in a game with eight scores in a 7-41 win over Kent State. He also had 409 rushing yards.

Need to know: The Spartans are set to make their first MW championship game appearance in program history, while the Broncos will appear in their fourth-consecutive Conference championship contest and fifth overall.

Need to know: USC is making its third championship appearance and looking for its first 6-0 overall start since 2006. Washington was originally set to compete. However, due to COVID-19 concerns, the team will not have the necessary number of players available to participate. If USC can’t play for the same reasons, Colorado (4-1) would replace the Trojans.

Need to know: Alabama sits on top of the playoff rankings and would secure the top seed by beating the Gators. Nick Saban and company have not lost in its six SEC Championship game appearances since 2009. In the last six title games Alabama has won, four have been by double digits.

Need to know: Since inception in 2018, the Sun Belt Championship has seen Louisiana take part in both title games, marking this the Ragin’ Cajuns third appearance after losing the last two to Appalachian State. The Chanticleers was previously an FCS team and didn’t join the Sun Belt Conference until 2017 and did not have full bowl eligibility until 2018. If Coastal Carolina beats Louisiana, there is a scenario in which they can make a New Year’s Six bid.