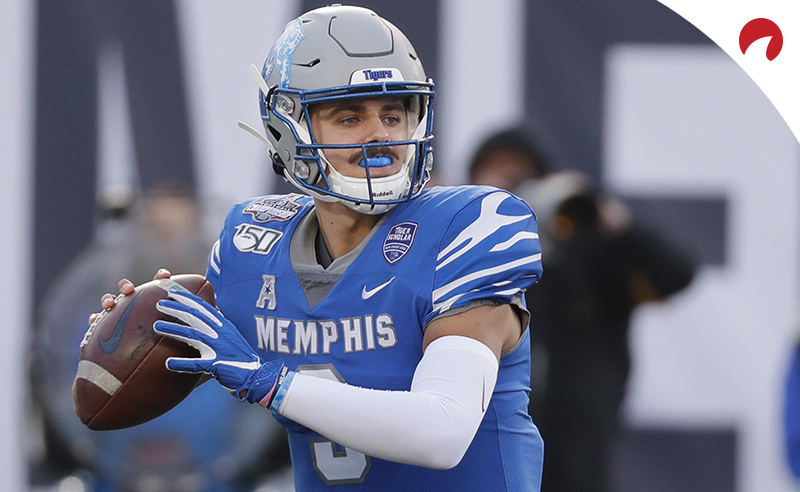 We are headed to Week 8 of the college football season and business is about to pick up as the Big Ten and Mountain West are set for their first action, which only means more options for our best bets of the week.

It won’t be long before bowl season is in full swing and the College Football Playoff begins. We are still waiting on the Pac-12 which is joining in the fun in early November.

Each week, I will sift through the numbers and pluck out my favorite bets while offering a little reasoning behind the picks. Last week, we swept our best bets for the first time this season, going 4-0 with very little sweat, and we are now 10-11 on the year. We look to maintain our winning ways and surpass .500 this week.

Without further ado, here are my best bets for Week 8 of the college football season.

New to the college football scene? Check out our handy college football betting guide to help you get in the action. Also, keep an eye on our College Football Odds page for the latest up-to-date betting lines.

Temple Owls vs Memphis Tigers OVER 71.5

There was no shortage of points last week when Memphis edged Central Florida 50-49 and I anticipate another high-scoring affair for the Tigers this week against Temple. The Owls have had a leaky defense, giving up 68 points over two games, including 37 last week against a South Florida squad that had averaged 14.5 points per game ahead of that meeting.

The Memphis defense isn’t much better, giving up a whopping 590.3 total yards per game, including 458 through the air. Meanwhile, Temple’s run defense has a lot of holes and the Tigers average 214.7 rush yards per game, so I’m looking for endless majors and to sail to a big OVER.

For the first time in school history, Coastal Carolina is ranked in the AP poll at No. 25 after starting the season 4-0, including a 30-27 win last week at then-No. 21 Louisiana. The Chanticleers also have a road victory over Big 12 squad Kansas to open the year and two home wins by an average of 25.5 points.

Georgia Southern also was competitive vs Louisiana, falling 20-18, and eked out a 27-26 win over Campbell, a team Coastal Carolina beat 43-21. This matchup will be a battle of quarterbacks Shai Werts for the Eagles and Grayson McCall for the Chanticleers. If that is indeed how this game plays out, the edge goes to Coastal Carolina, which averages 232.5 passing yards per game to Georgia Southern’s 118.3.

This might appear to be a bizarre pick with two teams that are averaging north of 40 points per game but call me crazy, I like the UNDER. To start, the No. 19 Hokies have a big issue at QB, averaging just 172.5 passing yards per game. Their leading passer is Braxton Burmeister, who has completed just 46 percent of his passes for 348 yards and one touchdown. So reliance on their run game will kill the clock.

Meanwhile, Wake Forest QB Sam Hartman has passed for more than 240 yards just once this season, last week vs Virginia. These teams are very similar and there will be points scored, no doubt, but I think the run attacks are going to chew up the clock and the teams should squeak UNDER 68 points.

Florida State is coming off an upset as a 13.5-point underdog over then-No. 5 North Carolina last week despite being shut out in the second half. As for Louisville, it suffered its fourth loss in a row, though it didn’t come with a lack of effort, as the Cardinals fell 12-7 at then-No. 4 Notre Dame.

Neither team is a world-beater on offense, with Louisville averaging 24.6 points per game and the Seminoles 24.2, while the defenses are also very similar. I expect dual-threat QB Jordan Travis (FSU) to keep the Cardinals defense on edge as he continues to improve, while Malik Cunningham finds some openings against the Seminoles secondary, but overall I think it will be a close drawn-out battle.

It’s hard to know what the Owls really are this season, having had three games postponed while winning their lone outing 21-17 over Charlotte. Meanwhile, Marshall has jumped out to a 4-0 start and is playing its first home game since it topped then-No. 23 App State 17-7 more than a month ago.

This OVER basically hinges on whether Florida Atlantic’s run game, which rushed for 217 yards vs Charlotte, can break through the stout Thundering Herd run defense that’s allowing 68.5 rush yards per game. We know Herd QB Grant Wells, who has been steadily improving in his freshman season, should have ample opportunity to sling the ball against an Owls secondary that surrendered 314 passing yards vs the 49ers. There’s a chance Marshall goes OVER 51 by itself like it did against Eastern Kentucky to open the year.